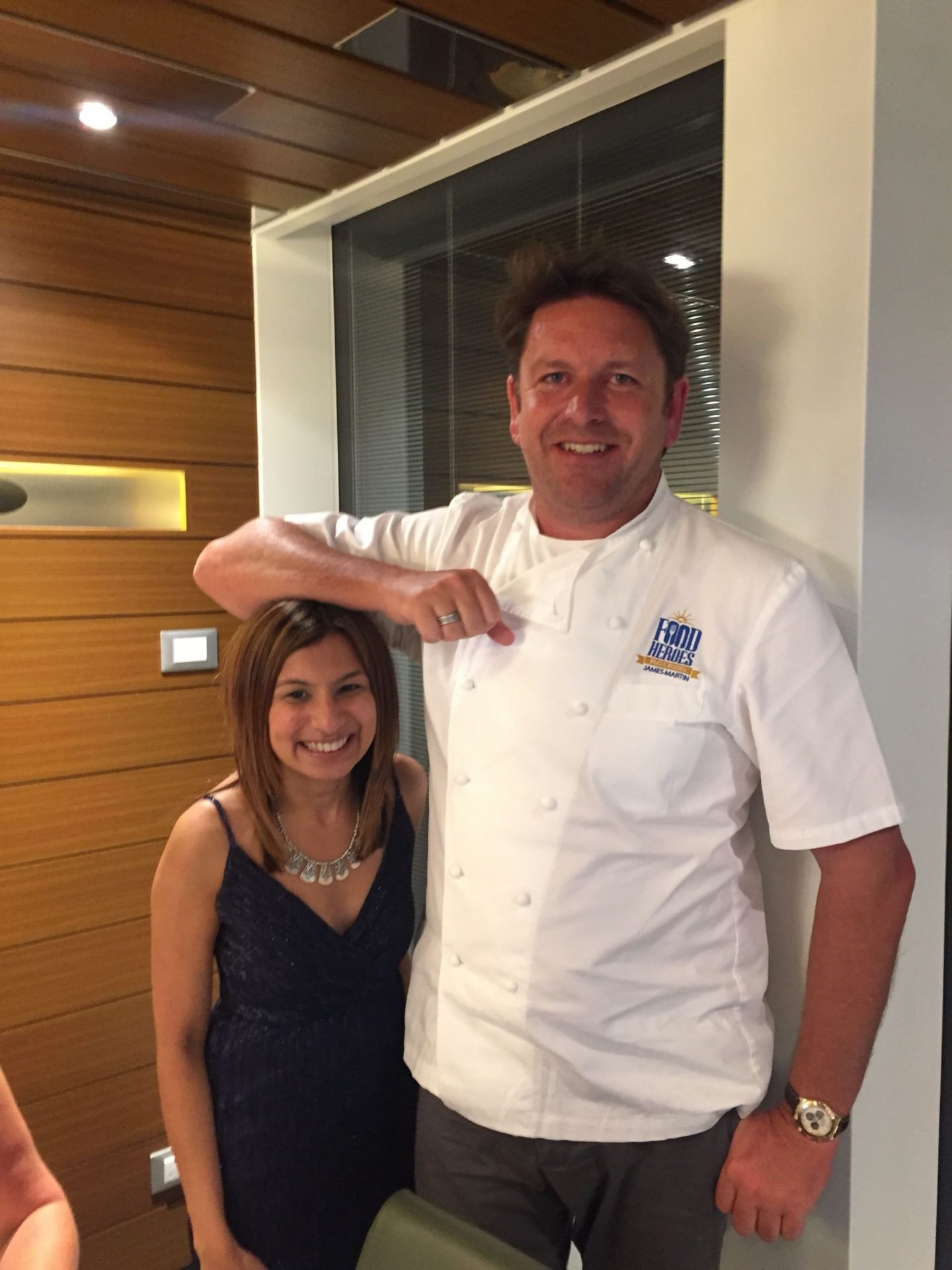 My Top 10 ‘Once in a lifetime’ experiences so far have included meeting celebrities, both in the human and animal world, gastronomical experiences in the most unusual of company and in the most exciting locations, watching my grandad graduate with a doctorate, as well as being able to donate my skills to a cause close to my heart. Here are my top 10 in no particular order.

I loved watching Antonio Carluccio with his partner in crime, Gennaro, on TV, and it always made me wanderlust about going to Italy and experiencing the off the beaten track foodie adventures, so much so that last year I found myself having lunch on a Saffron farm in Tuscany,  as well as going Truffle hunting.

His famous “MOF MOF” or “minimum of fuss, maximum of flavour” cooking philosophy has always stuck in my mind whenever I am cooking Italian food at home.

Antonio Carluccio’s passing last year filled me with great sadness, and he will always be the greatest Italian chef that was!

I am forever grateful to have been given the opportunity for an exclusive  interview with him. I remember vividly how the night before I excitedly prepared some questions.  I did sneak in a non-food related question and am glad to report he loves cats as much as I do!

I have been so lucky to have had met one of my food heroes, Chef Michel Roux Jr a total of 3 times (every single time has felt like a once in a lifetime experience)! Once at HSBC when he was doing a book signing, the second time was while out dining and the third time was at the Langham London, where I was previewing the Valentine’s Afternoon Tea!

He is such a lovely down to earth guy and always ready for a chat, always happy to take a photo, and always smiling!

I have lost count of how many of Rick Stein’s shows we have recorded and watch over and over again, our favourites being his India series, so much so that I even purchased the book.

He is Amit’s absolute favourite TV Cook and so when I found out he was doing an event at Chewton Glen in collaboration with the Pop up Picture Company around the time of Amit’s birthday, I had to get tickets. It was absolutely amazing and we even got to meet him properly and have a little chat!

He is just such an incredibly inspiring guy with so much enthusiasm for his love of food and it really showed when he spoke to us!

4. Having dinner cooked by James Martin on a Mediterranean cruise with P&O Cruises

When Saturday Kitchen (the original one) left our screens I was devastated and for a period of time my Saturday morning were just not the same. When an opportunity arose to go on a Mediterranean cruise I jumped at it, and what was even better was that food hero James Martin was going to be on the cruise and I had a small intimate group dinner scheduled as part of the trip, where he would actually cook for us! Yes it was definitely a “pinch me, am I dreaming” kind of moment.

As you can imagine I totally fan-girled at every single moment and even more when he jokingly used me as an arm rest when I asked to get a photo with him!

He is even more gorgeous in real life!

When an email popped in my inbox inviting me to Mexico City to attend the Latin America 50 Best Restaurant awards I thought it was a joke at first. However, it was actually legit and I went to Mexico City all by myself and had the most incredible  time and it was such a superbly organized press trip. I got to experience the food, culture, arts and main sights in Mexico City too.

Getting dressed up and attending The Latin America 50 Best Restaurant Awards was definitely a once in a lifetime experience. It was just phenomenal seeing all the various restaurants that were included and also getting to try the food for lunches and dinners throughout the week I was there at all the Mexican restaurants that were included in the list.

When I heard Grumpy Cat was coming to London, I headed to HMV on Oxford Street and queued up by myself for at least 40 minutes, just to see Grumpy Cat. Sod’s law when it was my time to see her she had decided to close her eyes. It was a once in a lifetime experience nevertheless!

7. Afternoon Tea at Giraffe Manor in the company of Warthogs and Giraffes

I grew up in Kenya I kind of took it for granted that we had access to see wild animals and it was only when I moved away I realised how lucky I was! On a visit back I scheduled Afternoon Tea at the Giraffe Manor and that was definitely a once in a lifetime experience scoffing on scones while Warthogs eyed them with glee.

The icing on the cake being able to feed and kiss the Giraffes after!

8. Breakfast on a helipad in Doha, Qatar

One of those “is this really happening” surreal moments was when we had breakfast on top of a helipad in Qatar, at the Shangri-La Doha, with the most thrilling views of the city!

I think it is quite possibly THE best breakfast experience I have ever had and not sure how I can possibly ever top this one! Plus the coffee and croissants were to die for!

My grandad is quite the role model – he is in his 90s, and was awarded the very deserving Honorary Doctorate of Humanities Degree by The United Graduate College & Seminary, USA on 13th December 2013. I was so grateful to have been in Nairobi during that time to attend the graduation ceremony, and walked alongside him as he went to receive this amazing accolade. It was definitely one of my top once in a lifetime experiences and that moment of proudness I felt will stay with me forever and motivate me in my own endeavours.

The DSWT is close to my heart, and alongside fostering orphaned elephants through monetary means, I have also had a once in a lifetime experience donating my excel and marketing skills to the UK office, helping with database maintenance as well as trends analysis to help plan fundraising  events better in the future.

Most Stunning and Magical Travel Destinations

﻿VacationRentals: Get A Home Away From Home

﻿Search For the Best Traveling Deals on IHG.com

﻿Feed Your Wanderlust with Trafalgar

Top 5 Attractions in the Caribbean

Motel 6, Your Perfect Solution for A Getaway

Add Us To Your Page

The Peso is Down. Time to Visit Argentina

Visitors Pledge to Protect the Environment While Visiting New Zealand

Travel Destinations with The Best Dishes

Most Stunning and Magical Travel Destinations

﻿VacationRentals: Get A Home Away From Home

﻿Search For the Best Traveling Deals on IHG.com

Get the Best Airfare Deals With Cheapair

﻿Travel The World While Young With Contiki

﻿Feed Your Wanderlust with Trafalgar

Top 5 Attractions in the Caribbean

Motel 6, Your Perfect Solution for A Getaway